ABOUT THE AMETHYST MEDICAL BIOMAT 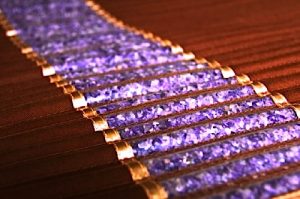 Far Infrared light, or FIR, has seen increasing popularization in recent years and providers and patients alike have discovered the benefits of this safe and gentle therapy.

Far Infrared Waves raise the body temperature warming the body and expanding the blood vessels. This creates an increase in peripheral blood flow and volume, resulting in improved circulation and heart function

Far Infrared heat therapy is widely used to relieve many symptoms associated with arthritis and musculo-skeletal conditions such as pain, sprains, neuralgia, bursitis, muscle spasms, joint stiffness and much more.

The negative ions delivered directly to the body through the biomat are 75% more effective than air ionizers as reported by NASA. Scientists have discovered that FIR filtered through amethyst crystals organized the FIR into a geometrical pattern with higher bio-campatibility. Daily use would surely help you improve your health and well-being as you navigate through your busy full life.

Far Infrared Rays penetrate deep into the body raising the body temperature, inducing an artificial slight fever which activates the immune system. Hippocrates stated, “Give me the ability to induce fever and I will cure all diseases.”

The far infrared resonance heats up the internal temperature of the body, increasing circulation, thus enabling the blood to melt out the acidic toxins that have been deposited for years in one’s arteries and tissues.

Common problems asociated with lifestyle and aging such as; high blood pressure, osteoporosis, headaches, digestive problems, circulation problems are believed by many to be the result of excess acidity in our systems. Scientists have reported that the use of far infrared, along with consuming certain alkaline minerals and foods can help the body eliminate these acids thereby improving overall health and slow the negative effects of aging.

Far infrared rays (FIR) are close to the light frequency of natural sunlight, but do not contain any of sunlight’s harmful UV/UVB radiation. Therefore, FIR provides safe and gentle benefits that have been recognized by the scientific community including researchers at NASA.

Recent studies show that far infrared light stimulates the production of healthy cell tissue, which promotes accelerated healing throughout the body and assists the body in eliminating cellular wastes and toxins. The FIR produced by the BioMat penetrate 6-7 inches into the body, allowing for detoxification and healing of the muscles, bones, connective tissue, and internal organs.

Negative ions are molecules that contain abundant electrons that are able to neutralize pollutants, toxins, and wastes. Therefore, the presence of negative ions in the body assists the immune system and improves cellular metabolism. These effects help combat illness and aging.

Negative ions are found abundantly in the natural world in rainforests and near waterfalls and oceans. The energizing, refreshing quality of these places is due in part to negative ions, which are also produced by the BioMat and promote a sense of wellbeing.

The other half of the secret of the BioMat is the layer of embedded amethyst and tourmaline crystals. Scientists have discovered that amethyst has the property of conducting and magnifying FIR light waves, organizing the rays into geometrical patterns that allow for a higher bioavailability. This increases the effectiveness of FIR to provide optimal healing.

Heat has been used to combat disease for most of human history. In fact, the body’s innate response to pathogens is to increase the body temperature and create fever to fight the invading illness. In similar fashion, the unique infrared heat from the BioMat stimulates the immune system and helps the body detoxify the organs and tissues. The heat settings on the BioMat are conveniently adjustable, ranging from ionic energy with no heat, all the way up to sauna-level detox heat.

So what’s the difference between regular heat and the special heat produced by a BioMat?

Regular heating pads use electric coils to produce conductive heat that is limited by thermal conductivity. It is only able to heat the outer surface of the body. The BioMat is different because it creates infrared radiant heat, which has the unique ability to penetrate deeply into the body to create healing and deep relaxation. It can be compared to the feeling of laying in the sun and feeling warmed from inside out. This type of radiant heat is more conducive to healing because it reaches to the muscles, organs and cells.

A $100 discount is available to US residents on the Professional BioMat for the following: